We’ve recently rolled out a new model for helping our teams meet the Digital by Default service standard.

Rather than assessing services against the standard at the end of each delivery phase, peer reviewers have been giving them regular feedback and recommendations to help them meet the standard.

We’ve called this new model ‘continuous service review’ and you can read about the challenges and opportunities it presents in a previous post.

In this post we want to share one of the ways we have been training our peer reviewers in the new model...

The Game of Standards!

What is the Game of Standards? 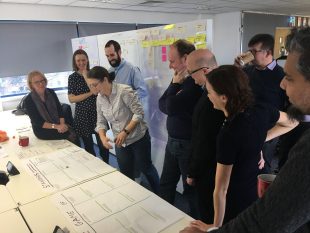 The Game of Standards, created by Justice Digital & Technology’s Emily Hall-Strutt and Georg Fasching, is a fun, interactive hybrid of a 1980s board game designed to help service teams understand the service standard.

The board contains 18 squares - one for each point of the standard. Players roll a die and pick up a corresponding number of cards, which might either be a set of questions that assessors might ask about a specific point in the standard, or pieces of evidence that teams might provide to show that they’re meeting a point of the standard.

The teams need to correctly identify which point of the standard the card relates to, and to fill up the board until they have placed all the cards in the right place. We’ve tried the game with a single team playing by themselves, but we find that a little healthy competition gets people more engaged.

There are three levels to the game, each corresponding to the criteria for meeting the standard at Alpha, Beta, and Live.

By gamifying some of the training, we find that people really engage with the standard, think critically about what each point is about and how to tell whether a service is meeting it, and and retain more of what they learn than they might from reading a document or listening to someone talk. It’s also quite fun!

What’s next for the Game of Standards?

So far, dozens of people within Justice Digital & Technology have played the game, but we’re starting to look beyond our London offices to see whether other teams and departments can use the game, or adapt it to their own needs. 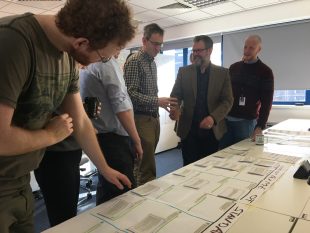 Earlier in the year, a training session at our Digital Studio in Sheffield saw two teams play the game, comprising people from HMPPS, the Home Office and the Department of Education. As well as enjoying the game, the participants told us that they came away with a much greater appreciation of the service standard, as well being able to collaborate with people from other departments.

More recently we invited the GDS Assessments team to play the game with us, and they are now thinking about how they could produce something similar for people across government to access and use themselves.

If you’re curious about the Game of Standards, or have found success with a different way of training people against the standard, we’d love to hear about it in the comments below!

Would you like to work on things that matter? Then find out more about working at Justice Digital & Technology.